CSIR-NBRI Botanic Garden is one of the oldest and historical Botanic Gardens in India. The Garden is known for its immense contributions towards conservation and sustainable utilization of important plant resources of economic, ornamental, horticultural, biological, ecological, educational and recreational values. The Botanic Garden is actually the historical ‘Sikander Bagh’ laid out around 1800AD as a royal garden by the ‘nawabs’ (King) of Lucknow. It is located in the heart of Lucknow, the capital city of Uttar Pradesh state. The garden, full of greenery and vast collection of plant diversity is spread over an area of 65 acres and serves as lungs of the city.

This Botanic Garden serves as a National Facility with four main functions viz. conservation, education, scientific research and display of plant diversity in plant houses and arboreta. It is designed to conserve the indigenous and exotic flora and fulfils the basic function of making available for study, research and use, at one place, a wide diversity of trees, shrubs, climbers and other plant species. The Botanic Garden is a living repository of over 5000 taxa/cultivars of various groups of native and exotic plants. The garden has an excellent collection of ornamental crops, trees, houseplants, medicinal plants, cycads, palms, ferns, bryophytes, bonsai, water lilies, cacti and succulents. There are several thematic gardens and plant houses where plants are displayed for educational and aesthetic purpose. The ‘Touch and Smell Garden’ for the differently abled with Braille system in this Botanic Garden. The Botanic Garden has adequate infrastructural facilities for propagation, such as nurseries, experimental plots, propagation unit, mist chambers and drip irrigation facilities.

Considering the rich plant diversity in the Botanic Garden, the Institute has been designated as Living National Repository by the National Biodiversity Authority, Chennai. Besides, this Botanic Garden has also been recognized as a Lead Botanic Garden by the Ministry of Environment, Forests and Climate Change, Government of India for enhancing the ex-situ conservation activities of threatened species. The institute has been designated as DUS Centre for Bougainvillea, Gladiolus and Canna by PPV&FRA, Ministry of Agriculture & Farmers Welfare, Government of India.

Botanic Garden has an excellent germplasm collection of ornamental crops viz., 202 cultivars of Bougainvilleas; 80 cultivars of Gladiolus; 200 cultivars of Chrysanthemums; 50 cultivars of Canna, 125 cultivars of Roses. 15 species/cvs./races of Nelumbo nucifera (Lotus) and Nymphaea spp. (water lilies) are conserved in the Garden. Besides the ornamental crops, the garden also has germplasm collections in different plant houses: an arch shaped Conservatory for Tropical and Subtropical Plants (300 species/cultivars); a Cactus and Succulent House (250 species/varieties); a Palm House with 52 species; a Cycad House (70 species), an Orchidarium (120 species), a Gerbera House, a Fern House (100 species of ferns and fern allies) and a Moss House (20 species). The Botanic Garden also has an arboretum which has around 400 species of trees and shrubs.

The Botanic Garden organises two annual flower shows for creating awareness among the masses regarding importance and usefulness of plants, promotion of floriculture and outreach of its research activities.

In the Incubation Centre, the beneficiaries from all the segments of the society are trained in all the techniques of dehydrated floral crafts and business components are demonstrated. Here floral and foliage parts are used for making various useful products like greeting cards, landscapes, photo frames, table mats, coasters, wall hangings, artefacts in glass containers  and potpourri items. 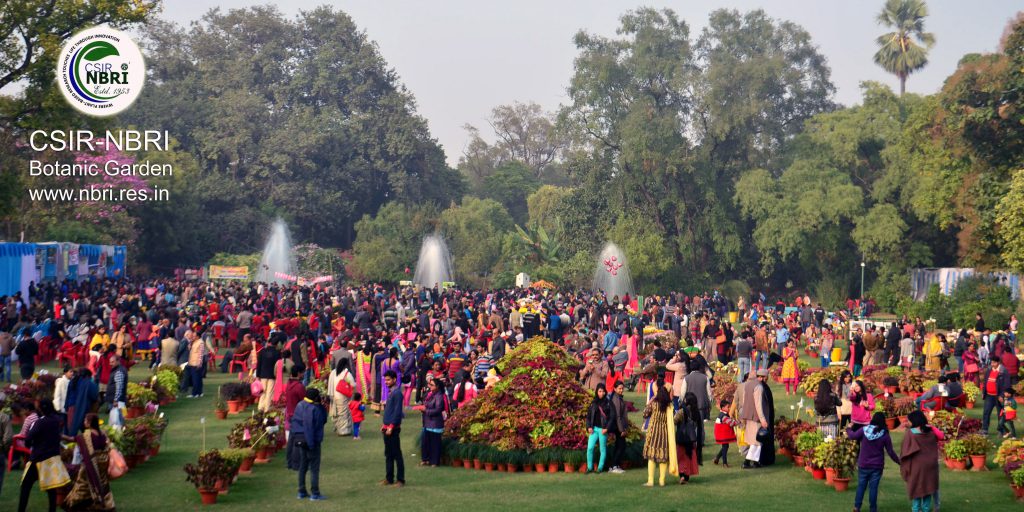