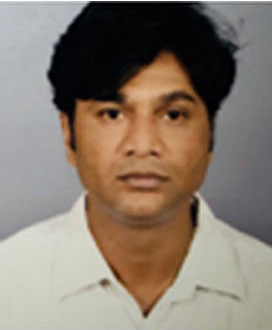 The research in my lab focuses on development of transgenic cotton plants for various abiotic and biotic stresses and male sterility. For insect resistant cotton plant development various approaches are adopted e.g, novel insecticidal proteins, siRNA, cry proteins, and plant’s own defence mechanism (methanol production).  Stacking of these genes together will certainly provide protection against wide range of insect pests. Insect inducible methanol production in cotton using pectin methyl esterases (PME) gene showed promising results against range of cotton insect pests including both chewing and sucking types. We also like to study the genetic and epigenetic gene regulation during insect infestation in cotton especially in reference with pectin methyl esterases. We are also involved in genome editing by the CRISPR/Cas9 system to be used in tomato for enhanced shelf life.

Cotton mealybug, Phenacoccus solenopsis, is a major insect pest that feeds on cotton plant causing extensive damage leading to crop and productivity loss. Different stages of mealybug has potential role in spreading and damaging the crop plants. In this context, we have studied the genome wide response of mealybug infesting cotton using transcriptomic and proteomic approaches. Our comprehensive genome wide analyses have revealed several new and interesting insights to the different developmental stages of mealy bugs. Knowledge gained through this study could be further exploited to develop RNAi strategy against the pest in controlling their spread in economically important crop like cotton.

Plant cell wall plays a major role in defense mechanism against biotic and abiotic stress as it constitutes the physical barrier between the microenvironment and internal component of the cell. As emitted methanol is toxic to the insect pest, we use PME gene for the better methanol production. Our group works on over expression of PME gene under the insect inducible promoter which causes enhancement of methanol production at the time of insect attack, this provides better insect resistance property to the plant. We found 10-15 folds enhanced methanol content and emission level at different inducible time point interval (15min, 30min, 45min, 60min) which causes 85-90% mortality caused by transgenic tobacco in both chewing (Spodoptera litura  & Helicoverpa armigera) and sap-sucking (Aphid, mealybug & whitefly) pest.

Tomato is a major crop plant that and is ranked first among all vegetables in terms of its nutritional value. Although tomato production has been increasing within the country, a large fraction is lost to post-harvest due to poor shelf life and rapid deterioration following ripening, leading to considerable economic losses to the farmers. Reducing these losses is essential and has been attempted by breeding and transgenic means to varying success. Here, in this study, we are targeting two ripening-specific enzymes. The main objective of this research is thus generating a reproducible system of genome editing by the CRISPR/Cas9 system for use in tomato and possibly other Solanaceous plants. Also, the genome edited fruit would be expected to show delayed fruit ripening.

Developing male sterile lines of crop plants is important for their deployment in hybrid development. Hybrid seeds are used for stimulated crop production, as they harness heterosis. The achievement of complete male-sterility in the female-parent and the restored-fertility in F1-hybrids are the major bottlenecks in the commercial hybrid seed production. We have earlier demonstrated the male sterility–fertility restoration system by engineering tapetum of female and male parents in tobacco. This proof of concept is now successfully demonstrated in a commercially important fibre yielding crop, Cotton. Here, for the first time we have demonstrated the development of transgenic cotton female lines showing 100% male sterility.

The Transcriptome analysis of different chemotypes of withania somnifera was performed to identify some important members of gene families viz. cytochrome P450s, glycosyltransferases and methyltransferases involved in the synthesis of withanoloids. For the  validation and functional characterization of gene namely cyp450, putatively involved in the distal pathway, The gene was cloned in three different chemotypes for the development of hairy root culture. The transgenic hairy roots expressing cyp450,will be further evaluated for its involvement in the  withanolide production.